Mobile devices are small and hand-held, and optimizing for these devices is the same as it is for desktops, right? Think again. The 2014 Detroit Auto Show did more than present us with the latest models in automobiles; it showed us what the future holds in voice technology. It should profoundly change the way we think about mobile marketing

In 1982, Knight Rider was a hit and a car named KITT was the costar. How did Michael Knight interact with KITT? Knight, played by David Hasselhoff, spoke to KITT. That show offered a peek into the future, an advanced, artificially intelligent, and nearly indestructible car. We haven’t yet reached the point of indestructible cars, but the Artificial Intelligence (AI) is here and it means a change in the way we do business.

At the Detroit Auto Show, the hot item is voice technology. One of the main selling points for new cars is a voice recognition system. This is the wave of the future, and your customers are now Michael Knight. They are talking to their cars. They are asking their cars questions: “Where is the nearest gas station?” or “What is the highest rated sushi restaurant near me right now?”

What does this mean and how does it affect your marketing? If you read the trades, you’ll notice all of the ballyhoo around the update to Google’s Hummingbird in Q3 last year. However, it was rare to read about how those changes are moving directly to voice rather than typed search queries. The other significant, yet scantily mentioned change, was to “natural language”. That last bit is where your marketing has to change.

Think about how different this is: “Best sushi restaurant in West End Boston” compared to “What is the highest rated sushi restaurant near my current location?” The first query is how we’ve been doing it since the advent of the first real search engine. We’ve done an excellent job of incorporating keywords into our website optimization in order to maximize visibility for such type-centric searches. But now, we are moving beyond typed searches and using voice. And we talk much differently than we type.

For a perfect example, one only needs to watch how people interact with the Siri app on the Apple iPhone 4S. People typically say, “What is the definition of Semantic?” This differs from a Google search in that we wouldn’t type, “What does Semantic mean?” We simply type the word “Semantic” and choose a likely result from a list of options. This change dramatically alters how we program for voice commands and natural language search. Optimizing your website for keyword phrases is rapidly becoming obsolete.

If traditional methods won’t work, what will? Below is a graph indicating steps needed to transition to this new reality. We are currently in the section where we are transitioning from Web 2.0, the Social web, to Web 3.0, the Semantic web. Be forewarned though, we won’t be in this transition period very long. The good news is that the steps taken now are building blocks toward the future.

A Semantic web search works differently than a Social web search. A fan of Miley Cyrus searches for the latest news about her and discovers a listing of upcoming concerts. The fan clicks on a link that has a concert date for Boston. In a Semantic web search, the listings also contain relevant information to the topic selected – for instance, a link to the ACME Hotel Boston right below the Miley Cyrus Boston concert announcement.

How did a hotel show up in those results? Resource Description Framework (RDF) provided the connection. RDF is a machine language that allows seemingly unconnected information to be connected. It allows a database on a server that contains information about the Boston concert to access data from other databases on other servers to logically deliver the solution that some people stay in hotels when attending concerts and like to be as close as possible to the venue. It’s the standard for encoding metadata and other knowledge for use on the Semantic web. 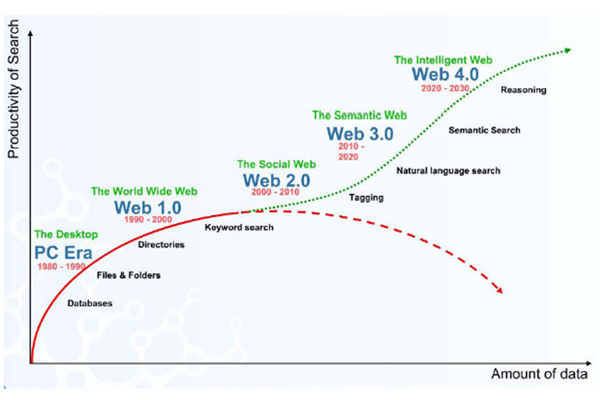 This is happening and it is happening now. The failure to adapt and incorporate programming that supports voice based search will result in rendering your mobile optimization program virtually useless.

Now a little bit of trivia. Who was the voice of KITT and what other show did he star in at the same time?