In a meeting this week, HyperDisk Marketing’s President, Steven V. Seghers, made a casual yet matter of fact statement, “the reality is that there is no longer a distinction between digital and traditional.”

He was speaking about marketing. The attendees all silently agreed if not in fact nodding our collective heads. That was to be expected. We are, after all, employees of a digital agency. It would be unnatural for us to disagree.

Taking his statement to a much larger audience, however, would elicit howls of indignation from clients and potentially “traditional” advertising executives. Since Sir Tim Berners-Lee, the inventor of the World Wide Web, first specified the three fundamental technologies that remain the foundation of today’s Web – HTML, URL, and HTTP – the media, clients and agencies have consistently maintained the separation of digital and traditional.

Let’s look at how much is invested into each in the United States through the end of Q2 2014. A few things to keep in mind about the graph below; traditional advertising has been around since the ancient Egyptians used papyrus to make sales messages and wall posters. Digital wouldn’t even yet be considered an infant compared to that history. And yet, only a little over $12 billion separates the budgetary allocation between the two. 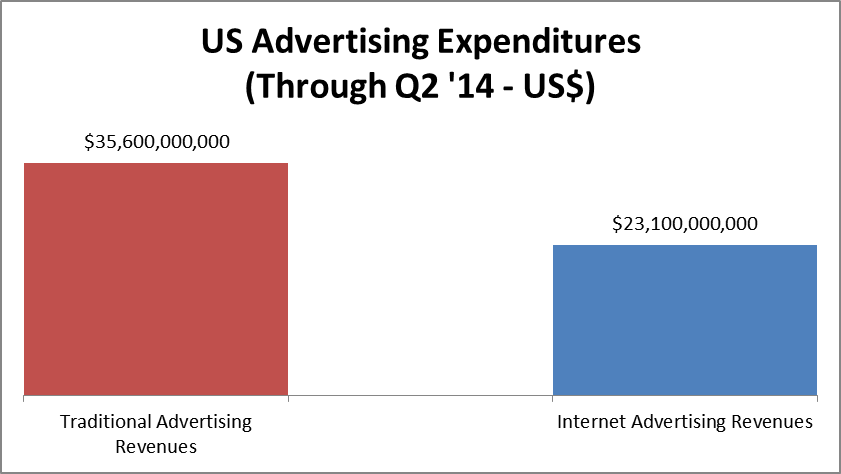 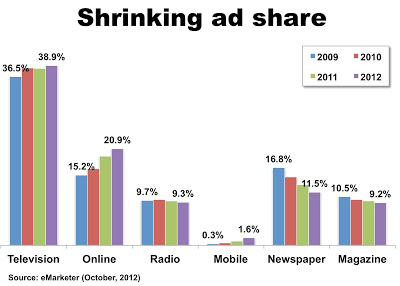 Consider this particularly dire prediction from ForwardPushMedia.com in January 2014 which culled data from an eMarketer report.

“Traditional Media is On a Bleak Decline According to the 2014 Advertising Outlook If your company is planning on using traditional media for its advertising efforts, you may want to save yourself the hassle. In fact, the only medium that is thought to remain steady for 2014 according to eMarketer.com is over-the-air advertising.”

The point here is that marketing should now be considered marketing without the demarcation of traditional and digital. It is simply “marketing.” It is what companies do in order to sell their products and services.

We as marketers evaluate the advantages and disadvantages of the various channels and platforms, consider the cost, and then allocate our funds to achieve optimal results. AdAge took a compelling view of this in a June 2014 article, “Blue-Chip Advertisers’ Spending Hits Record $109B, Passing Pre-recession Peak.”

“Spending for the 100 LNA jumped 6.0% and represented 45.5% of those firms’ U.S. total spending. Measured media accounted for the rest of the pie — a 4.3% slice for internet display advertising and 50.2% for traditional media (TV, radio, print, outdoor).”

Besides the good news of a rebounding advertising industry, AdAge now uses the term “Measured Media” which combines internet display advertising along with TV, radio, print, and outdoor. It’s not necessarily the case those latter four are always “Measured Media,” though. I was a Nielsen Media Family member for two years and saw how inaccurate those numbers can be, though I do appreciate the analysis.

If it is agreeable that traditional and digital should be combined into the term “marketing,” except under specific usages such as a media buy spreadsheet where the allocation of dollars must be itemized, the next step is deciding what type of agency is more suitable to managing those dollars, a digital agency or a traditional agency?